R.B. Kuiper, For Whom Did Christ Die? 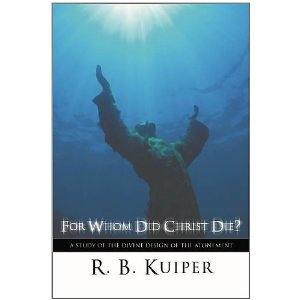 "There is, I fear, an additional reason of quite another kind for the unpopularity of the doctrine of the particular atonement. It lies not in Cavinism but in Calvinists, not in the Reformed faith but in some of its teachers; and it is not complimentary to them. Seldom does one hear from a Reformed pulpit an accurate statement of this doctrine. It is not at all unusual for Reformed preachers, in attempting to state it, to content themselves with saying that Christ died only for the elect. But that presentation requires both explanation and amplification. By itself it falls short of doing justice either to the Scriptural data bearing on the matter or to its historic formulation in the creeds of the Reformed and Presbyterian churches and the writings of the ablest Reformed theologians. In consequence, serious-minded hearers who have at least a superficial acquaintance with those passages of Scripture which bear on the scope of the atonement and who are not completely ignorant of the teaching on this subject by the church's confessions and theologians, are left dissatisfied and confused.