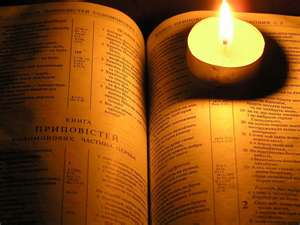 In the study of Scriptural prophecy there are certain sound principles of exegesis that should guide us in the search for Truth.

It is sound exegesis to harmonize the Old Testament with the higher light of the New Testament, and not vice versa. Whatever Christ taught by His Holy Spirit through the apostles is final, authoritative, and infallible. Therefore, we cannot go first hand to the prophecies in order to explain the New Testament by them. We must enter the prophecies with the New Testament key, by which they are opened to us either by express quotations, the history of facts, or by doctrine. Consequently, the prophecies in general will not admit of a strict and natural interpretation, when applying them to the affairs of the New Testament. This would lead us into the very error of the Jews and Judaizing professors, who minded earthly things, and affected a worldly kingdom. "Because they knew Him not, nor yet the voices of the prophets which are read every Sabbath, they have fulfilled them in condemning Him" (Acts 13:27). Hence, the necessity of attending diligently and adhering strictly to the apostles’ explication of the prophecies, as well as types of the Old Testament. As the apostles were the able ministers of the New Testament (2 Corinthians 3:6), so they had the infallible inspiration of the Spirit of Truth, whereby they were sufficiently qualified to explain and apply the prophetic word according to its true intent and meaning.

We are taught in I Corinthians 15:46: "Howbeit that was not first which is spiritual, but that which is natural; and afterward that which is spiritual." Everything under the legal economy of the Old Covenant framed and established by means of the faithful ministry of Moses, was "for a testimony of those things which were to he spoken after," namely, under the gospel (Hebrews 3:5). Moreover, the law had "a shadow of good things to come" (Heb. 10:1), but the body is of Christ (Colossians 2:17). Thus, many things were typical: Abraham's natural seed, the nation of , the land, circumcision, the Old Covenant, the Tabernacle, the Priesthood, the Sacrifices, the Sabbath, etc. According to the principle of I Corinthians 15:46, there are two realms in which prophetic prediction may be fulfilled, namely, in the realm of the natural or in the realm of the spiritual. The antithesis of natural is not literal but rather spiritual, and the fulfillment of the prophecy is literal in either or both realms in which it is brought to pass. For example, the healing of the blind man in John 9 was in the realm of the Spiritual, namely, the opening of the eyes of the understanding unto the salvation of the soul. In both cases, it was the literal working of the power of God, but in different realms.

Divine Revelation is progressive. "But the path of the just is as a shining light, that shineth more and more unto the perfect day" (Proverbs 4:18). There is no going back, but always a going forward to something more glorious, There will never be a restoration of the "divers washings," "carnal ordinances," "beggarly elements," "worldly sanctuary" with its sacrifices and Levitical priesthood, and the "middle wall of partition" between Jew and Gentile (Hebrews 9:1,10; Galatians 4:9; Ephesians 2:14). Such carnal, worldly, Mosaic distinctions have gone and gone forever. It seems to us that those who assert otherwise preach a revived Talmudic Judaism and ancient Rabbinism, and not the message of the New Testament.

The Old Covenant, which was the sole and only basis of the national relationship of to God, was a temporary arrangement, and has vanished away, never to be restored. "In that he saith, A new covenant, he hath made the first old. Now that which decayeth and waxeth old is ready to vanish away" (Hebrews 8:13). Thus was dissolved the national relationship to God of the nation after the flesh and that forever. The Old Covenant was made with a nation after the flesh, with the promise of material blessings in the , and therefore, could not be eternal. Under the New Covenant, which is spiritual and therefore eternal, national distinctions were wiped out, and the flesh is set aside forever. Christianity transcends, supersedes, and fulfills Judaism.


Apart from the Gospel of Christ it is evident there is nothing special in the future for the Jews in national covenant relationship with God. The last commissions of Christ to His disciples offers salvation to the Jew as an individual on the same terms that it does to the Gentile. There is no future special bargain offer to either one in national capacity (Matthew 28:19,20; Luke 24:47,48). "But the scripture hath concluded all (both Jew and Gentile) under sin, that the promise by faith of Jesus Christ might be given to them that believe" --whether Jew or Gentile (Galatians 3:22). “The heresy of dispensationalism results from the lack of a proper understanding of the nature of the Old Covenant and its relationship to the New. The Dispensationalists have never properly evaluated the change of covenants at ” (Dr. Cecil J. Lowry in his excellent booklet, Whither Israeli?)

The great object and end of the prophetic dispensation, as declared in I Peter 1:10,11, was to "testify beforehand the sufferings of Christ, and the glory that should follow." Christ directs the Jews to search the scriptures, and says, "they are they which testify of me" (John 5:39). His disciples were greatly disconcerted by His death; but after His resurrection He blames them for their slowness of heart to believe all that the prophets have spoken; and asks, "Ought not Christ to have suffered these things, and to enter into His glory? And beginning at Moses, and all the prophets, he expounded unto them in all the scriptures, the things concerning himself" (Luke 24:26,27). And He tells them, "These are the words which I spoke unto you, while I was yet with you, that all things must be fulfilled which are written in the law of Moses, and in the prophets, and in the Psalms concerning Me" (Luke 24:44). The apostle Peter, having adduced the testimony of Moses, adds "Yea, and all the prophets from Samuel, and those that follow after, as many as have spoken, have likewise foretold of these days" (Acts 3:22-25). And in general, he says, "To him give all the prophets witness" (Acts 10:43). Paul declares that in preaching the gospel, or "witnessing both to small and great," he was "saying no other things than those which the prophets and Moses did say should come; that Christ should suffer, and that he should be the first that should rise from the dead, and should shew light unto the people and to the Gentiles" (Acts 26:22,23).


From these passages it is evident that the great scope and ultimate design of prophecy in general was to bear testimony to Christ, and the affairs of His kingdom (Hebrews 10:7; Psalms 40:7), which is nowhere in the New Testament spoken of as an earthly, Israelitish, political, or temporal one (John 18:36). And this is what the angel means when he says to John, "The testimony of Jesus is the Spirit of prophecy" (Rev. 19:10), which imports that the testimony concerning Jesus is the real scope and spirit of the whole dispensation of prophecy, and that it has its ultimate accomplishment in Him, and in the affairs of His government.


According to the Old Testament, time was divided into two eras; the present age and the last days or the Messianic age. The prophets saw imminent judgment upon their nation as well as upon others, but in the future the Anointed One should come. His coming marked off a new era. The prophets were granted the privilege of seeing some of the glories of the time of the Messiah. Together their glimpses form one grand composite picture of the LAST DAYS in which Messiah should reign. The prophets saw no third age beyond the "LAST DAYS." This may be shown by a diagram as follows:
THE PRESENT AGE (That in which the prophets lived)


THE LAST DAYS (The days of the Messiah)

More emphatic than merely to say something is fulfilled, Peter uses language of identification: "This is that which was spoken by the prophet Joel." He refers to the time of Christ's first coming as THESE LAST TIMES, and John refers to his day as THE LAST TIME. In Hebrews the writer preserves the Old Testament distinction, according to which the time of God's speaking through His Son is in the “LAST OF THESE DAYS” (ASV.). The WORLD TO COME of Old Testament prophecy is subjected to Christ; and as he explains, "We see Jesus ... crowned with glory and honor." The conclusion to which these Scriptures lead is that the present time (from Pentecost to the end of time) is the last days of the Old Testament prophecy. What the prophets spoke concerning the age of the Messiah is now being gloriously fulfilled.


3 — THE NEW TESTAMENT DIVIDES THE LAST DAYS INTO TWO PARTS: THE PRESENT WORLD AND THE WORLD TO COME (Matthew 12:32; Mark 10:30; Luke 18:30; 20:34-36; Romans 8:38; I Corinthians 3:22; Ephesians 1:21; 2:2,7; I Timothy 4:8; 6:17-19).
The present world is temporal and limited to things of this life. The world to come is eternal, being inaugurated by the resurrection. In the WORLD TO COME they neither marry nor are given in marriage. Timothy is enjoined to charge them that are rich in THIS WORLD (age) to lay up in store a good foundation against THE TIME TO COME. The New Testament knows of no age intervening THE PRESENT WORLD and THE WORLD TO COME.
Posted by Charnockian Logic at 7:55 PM