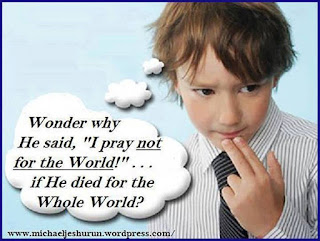 This text, Jn. 17:9, is used as an argument for strict limited atonement. There are no scriptural texts that teach that Christ died ~only~ for the elect. Strict Limited Atonement (SLA) advocates use Jn. 10:11 in an attempt to show this, but it does not say that He ~only~ gave His life for the sheep. To argue otherwise is a negative inference fallacy.

Verse 9 is addressing His immediate followers, who were with Him (v. 12). Verse 20 confirms this when He prays for those who in turn believe His follower's words.


He prays for specific things that are appropriate for each group.

For those who believe through their word He prays that they be one.

For the world He prays that the world would believe that He was sent by God.

So, it just is not true that He does not pray for the world at all. He prays for each group. This argument for strict limited atonement, based on Jn. 17:9, is not a valid one.

Posted by Charnockian Logic at 6:59 AM